This is kind of the “season finale” in my series about the year we just limped out of, where Jim and I have been sharing our zone defense approach to Lyme Disease. Or rather, Babesia, Bartonella, and Mycoplasma. I should probably show you a picture of what Lyme can look like a year into treatment. Jim took seriously the need to detox during treatment. When you agree to swallow the handful of pills that this war requires, you have to also promise to detox your body from the Lyme spirochetes that the antibiotics “chop” off to swim like poison in your bloodstream…until you take measures to eradicate them. Because if you don’t,  you become even more ill. Fighting Lyme is a huge commitment.

Jim took up running, cleaned up his diet, starting fighting those bugs, and is now 60 pounds down and HE NEEDS SOME NEW CLOTHES!  (I hesitate to tell him he looks good because I love him big and small, but he really does look good. Please don’t tell him. )

One year post diagnosis, the reflux is gone, the gout is gone, the hypoglycemia is only intermittent, the brain fog has mostly lifted, but his neck still creaks, and sometimes the effects of Lyme treatment make days less than fun to navigate.

But here’s my truth: he is THE PICTURE OF COURAGE, and he is a bad-ass Lyme fighter.

Having Lyme is difficult. DIAGNOSING Lyme can take an average of three years. But TALKING ABOUT LYME….can be even harder, because you risk being labeled a hypochondriac/tree-hugging/attention-seeking histrionic.

Raise your hand if you are a Lyme-fighter who has been told by a doctor that “they don’t really believe in chronic Lyme” or  “those diagnoses are really suspicious.”

Raise your hand if you are a Lyme-fighter who has been told that “you don’t look sick”  – which is meant to be nice but sometimes feels more like you are lying about being sick.

Raise your hand if you’ve been told that you “just need to clean up your diet” or “you’d be healthier if you were more positive” or “I don’t get sick because I don’t take any pills.” Well…that is fantastic! So happy you don’t have to take pills. (Really!!)

Ticks are tiny, but Lyme is invisible. Until you walk into a Lyme-fighter’s bathroom, you don’t realize that they tell time by the color of their pill case.

Jim had begun his own fight against the Lyme that had taken up residence in his brain, joints, and digestive system. I was jumping through hoops trying to beat back the bugs that lined my bladder and kidneys, and threatened my liver.

Really. He slept for 36 hours..in the middle of our little cabin in Maine.

And I’m going to hold my breath through this one because it still hurts to linger on, but with permission, I am sharing what I alluded to before: we had no idea that Lyme would continue its assault on our family. Our amazing, funny,  smart favorite third son accepted a scholarship to swim for the University of Virginia in June before his senior year of high school. We were thrilled to see his hard work pay off and his dream become a reality. We cheered when he got his Olympic Trials cut and we laughed when he slept for 36 hours straight afterwards. It was a bright spot in a dark time.

And then he started getting sick. Every three weeks. Every time he ramped up training, added a practice or a dry land session. And it started and ended the same way every time, with body aches, a fever, sore throat, cough/bronchitis, and an ear infection.

His entire senior year was plagued by a cascade of different issues –  different,  but kind of the same. We watched him pick himself up and restart his training so many times we lost count. He fought respiratory infections, migraines, groin and tendon injuries, and even a dangerous infection following a routine vaccine. He endured months of frustration when he wanted to be training and enjoying life before the real work of college and Division 1 swimming began. We LITERALLY saw dozens of specialists and appointments. And yet again, highly pedigreed experts kept assuring us that these were  isolated and easily fixed issues.

The domino effect came to a crash landing with Dylan’s diagnosis of Lyme disease in May.  I still haven’t found a way to describe how it felt to have my own illnesses, a spouse in treatment for Lyme… and a really sick kid. Except to again say that I’m so glad we went first.  When offered a longer, but more tolerable course of treatment, my new hero said “No way, I want to swim, hit me hard.” Watching him tolerate the side effects of treatment while his friends were at beach week completely undid me. I unraveled so quickly and so completely that I’m still not totally…raveled. Not in front of him, but as soon as his back was turned,  and at times to the point that my favorite second son had to literally pick me up off of the floor.

And I still cannot fathom the fact that WE DID NOT SUSPECT LYME in him until months into the crisis. We kept thinking we were at the finish line.

It did not occur to us that it could be Lyme…BECAUSE IT LOOKED SO DIFFERENT. Imagine…both parents in treatment for the same disease, yet WE were still shocked by the answer. This is a problem.

We did only what we could manage: we drew in, closed the circle, unable to engage in life beyond work and Lyme-fighting. I became completely  out of touch with my own issues – my mind disconnected from my body, swallowing the pills but not at all focused on my own healing. Aware that the only thing that propelled me was adrenaline and the churning of my stomach, trying to get a sick kid ready to go to school, study engineering, and compete at the highest collegiate level. I could respond to the urgency of the moment, but I crumbled and wept when not “on duty.”

This is what got us through…we held on and tried to smile.

Our definition of success is not what it used to be. Despite a strong start, our new hero decided that he has a different dream. He wants to be happy and healthy, and experience all that life in a rigorous program at a top-tier school has to offer. Swimming while fighting lyme and taking a grueling course load was too much. And life is too short.  Bravery looks different to each individual….but to us, it looks like an 19-year-old deciding that he has a different dream, and watching him step forward to own it when it might not be the popular decision.

I realize that by going into detail about my Iron Man and my 19 year old hero, I’ve neglected the other heroes in our story, the ones who have propped us up. The 23 year old who held his insane parents together when we moved out of our home 48 hours after dropping our last kid at college. The 26 year old hero and his fiancée who shower us with hilarious stories and thoughtful gifts and look for ways to make us laugh. Friends and family who moved into our mess and noted, but kindly ignored, how insane and distracted I was. Loves who sent cookies and ham and magic mac and cheese, and painted giraffes, and painted rooms, and packed boxes, and let us fill their yard with dumpsters full of trash. Friends and family who understand that while we are at our core the same loud people who love and laugh and talk over one another, we are also wounded and guarded and sometimes we have very bad days.

We have a long way to go, but we have come so far.

And we’re not going to keep quiet about it because our story is being repeated in homes all over the country, and especially all over our state. Our kind doctor has shared that she has entire NEIGHBORHOODS in Northern Virginia who are sick with Lyme. Not just entire families – but NEIGHBORHOODS. And we’re not hearing from them because THEY ARE UNABLE TO EXPLAIN IT.  I’m meeting new doctors in our new town, and I’ve already had two of them whisper that Lyme scares them to death…because of what they don’t know. And when they share the treatment protocols they are required to offer, it makes me scared for Lyme patients who think that their two-week course of doxycycline will knock out terrifying neurological Lyme symptoms. And if there is one person in a family with Lyme, chances are pretty good that at least one of your other family members has it as well…since you tend to hang out in the same places.  And trust me, it can and does look different in each person. Lyme is a family epidemic. 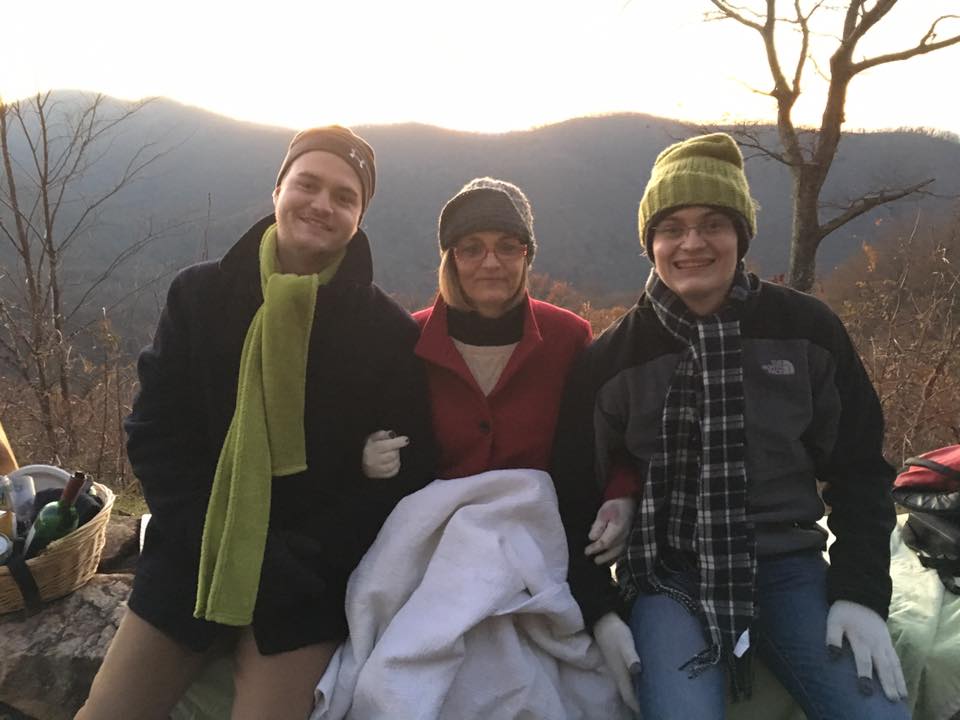 Sometimes we pile on all of our warm clothes to catch a sunset.

The hard edges of our lives don’t make life all bad. I know some of this will be redeemed.  Anne Lamott writes that

“Hope begins in the dark, the stubborn hope that if you just show up and try to do the right thing, the dawn will come. You wait and watch and work: you don’t give up”.

It’s a choice to keep laughing, to keep getting up, to seek daily joy, and to keep looking for answers. Our “wins” look different now, with a sunset picnic on skyline drive, or an evening of Netflix after working all day. WORKING. We can WORK! THAT is amazing.

So much love. Happy New Year. God bless you all good.