Has it really been since May, when the baby giraffe was new and summer was just beginning? 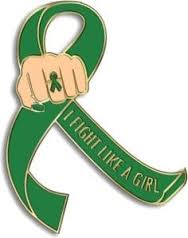 I began writing last year to share my story of an unusual path to some unexpected diagnoses – a place for seekers to land when they google things like “liver function tests” and “lyme” and “immune deficiency.” It took more than two years to untangle my myriad diagnoses, and I could have used information paired with hopeful reality during the fun months of limbo where we had no idea as to what was going on. My issues are rare enough that the likelihood of finding someone with the same constellation of illnesses who also happens to blog about them is as likely as my sons voluntarily replacing a toilet paper roll. (And Kristina Alcorn, I had already written this when you posted about this same topic on FB)

I chose the name “Embracing Plan B” from a long list of titles – things like “Living the Life You Didn’t Expect” or maybe playing off the lyme theme with something like “When Life Hands You Lyme” or my mother’s favorite which is “What to do When it Seems Like Everything is going to Hell” but that one didn’t really convey the open posture and positive vibe I was going for.

I hoped that the act of Embracing could set the tone for the way I hope to live under a new normal. Embracing is different from surrendering…. or even accepting. Embracing implies a sense of welcome. Arms opened, hands outstretched, proceeding with acceptance while seeking a silver lining. Settling into a new normal the way we sink into the comfy chair. When you embrace change – any change – you stop railing against it, and you open yourself to the new opportunities the change brings. Even a diagnosis provides opportunities to find joy if you are determined to throw confetti during the storm.

My type A self found satisfaction when plans unfolded….as planned. When hurdles were jumped, contingencies mapped, and budgets met. But more often than not, life rarely happens according to plan, and in order to survive and move forward in any area, we have to nurture (and embrace) a sense of resilience.

But, if we’re being honest here… it became harder and harder to write because we had a year where the unexpected came from every direction. Where almost every single corner of life was in limbo, and writing it all down made it much more real. I’ve re-started this blog so many times I’m like a teenager learning to drive a stick shift. But every time we flipped the page to a new month a new issue cropped up. Lyme and its companions have so profoundly affected my family that the last thing I wanted to do was to write about it during my spare time. But a recent visit to our family doctor reminded me that I was gifted with a voice, a laptop, and an annoying habit of googling things and telling everyone about it; because he very humbly shared that the events of the past year (among my own family) has changed the way they view, diagnose, and treat Lyme disease. We’ve shaken them to the point of seeking additional training, and they’ve asked us to use our voice to seek funding for education and treatment, so perhaps it’s time to get back to this.

And when we do finally get to the end of the story of 2017, you’ll understand why my writing has been so unpredictable. But now it appears that I need to get back to this place, where I share how Immune Deficiency, Liver Disease, and Lyme collided in a way that answered many of my questions, but also raised more than we ever imagined.

And when you ARE sick…life would be so much easier if you could just freaking be SICK. But it seems that you still need to make a living, feed the children, pull the weeds, and sort the socks.

But since we last chatted, we’ve launched a new business, sold one home, and found 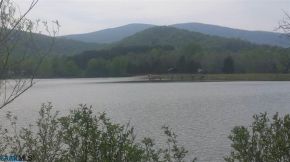 More on the new place…let’s just say the view looks like this, and all are welcome 🙂

another. We’re chasing a lifestyle that feels simpler, and is allowing us to make a living, feed the children, and pull the weeds. And ever since we unclenched our fists and said “yes” to this new idea, and embraced the fact that this story – OUR story, was going to be an honest part of our future, the doors have continued to open.

Right now, three of us (AND OH MY WORD ARE WE MISSING THE OTHER THREE) are in Maine. The place where my soul lives. (At least until August 21st – when my body and belongings will move to another place that feels very much like Maine, and also very much like YES. More about that later. Back to Maine.) Here Jim, Dylan, and I are recovering from the craziest nine months we’ve ever experienced.

We go to sleep to the sound of rain on the tin roof, and wake to fog lifting over the water, the dock inviting us to bring our coffee down. We watch Dylan do his dryland routine on the deck, and dive into ice-cold Maine water to get stronger and chase his dreams, stroke after stroke. As you may have noticed, 18 year olds who are about to go off to college tend to be extremely smart, and are definitely wiser than their ancient parents. Dylan does not escape this same sense of “worldliness” that must make it really difficult to tolerate us. 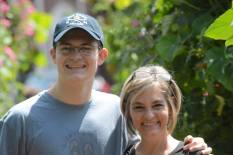 So please don’t tell him until much later that he has joined the ranks of those I call hero, demonstrating resilience, wisdom, and a depth of character revealed by months that forced all of us to dig deep, try again, go against the grain, and find new paths through uncharted waters. Which is why it’s so good that we are here. In waters that we know. Suspending time for just a little bit longer before 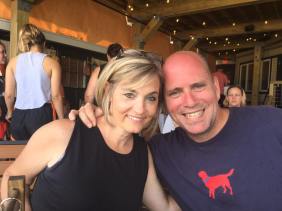 I think we’ll handle the empty nest just fine. As long as we get Jim to use sunscreen.

So it seems that I am back, you will here more about our story, and I will keep talking about Lyme – how to fight it, how to find it, how to prevent it, and how to live with it. But for now, for a few days, our youngest is still with us. And because we’ve done this a few times now, we know that these few days are just a little sweeter. Here he comes now, wearing only a speedo, sperries, and a backpack, and looking a little bit ridiculous. And I love it. Talk Soon.